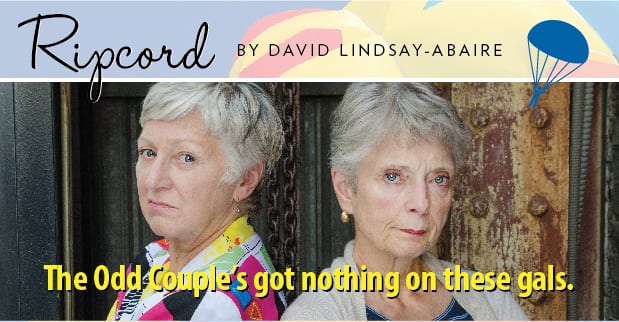 The stage offers a powerful way to address social ills, political strife and the deepest questions about life’s ultimate meaning. Shakespeare pondered the value of our mortal coil via Hamlet’s soliloquy. Arthur Miller used the Salem witch trials as a vehicle to denounce McCarthyism in The Crucible. Questions of racism, assimilation and culture helped make Lorraine Hansberry’s A Raisin in the Sun a towering cultural achievement.

But there’s also something to be said for old-fashioned entertainment.

BETC’s production of the show about two retirement-home residents engaged in a battle of wits aims for belly laughs, Remaly insists, even amid themes that touch on uncomfortable topics ranging from domestic abuse to mortality. Lindsay-Abaire draws on pratfalls, pithy dialogue and a steady stream of gags to keep the laughs flowing and lighten the weightier themes. Ripcord is situational comedy at its best.”Sometimes it’s better to have a play that’s not trying to solve the world’s problems, or speak truth to power, or be edgy,” said Rebecca Remaly, who’s directing the Boulder Ensemble Theatre Company’s production of David Lindsay-Abaire’s comedy Ripcord, which kicks off this weekend at the newly revamped Dairy Arts Center. “Sometimes it’s great just to have a really good time.”

BETC’s production of the show about two retirement-home residents engaged in a battle of wits aims for belly laughs, Remaly insists, even amid themes that touch on uncomfortable topics ranging from domestic abuse to mortality. Lindsay-Abaire draws on pratfalls, pithy dialogue and a steady stream of gags to keep the laughs flowing and lighten the weightier themes. “Ripcord” is situational comedy at its best.”I’d say there’s a lot of absurdist kind of humor in this show,” said Anne Oberbroeckling, who plays Marilyn Dunne.

Dunne’s head-to-head conflicts with her retirement home roommate, Abby Binder, played by Billie McBride, echo the humor of Neil Simon’s “The Odd Couple,” with a dose of added zaniness.

Dunne is the sweet and sunny half of the equation while Binder is her curmudgeonly foil.

“(Lindsay-Abaire) will throw in lots of crazy things. The two characters go to a haunted house at one point … There are plenty of absurd, ridiculous situations.”

Lindsay-Abaire, whose previous work includes much more serious pieces, such as “Rabbit Hole,” strives in this piece to find laughs in even the most uncomfortable situations. It’s a dynamic that appealed to McBride, who’s starring in her second BETC production following last year’s staging of the drama “Outside Mullingar.”

“There’s just a juiciness about the comedy in this show,” said McBride, who officially joined BETC as an ensemble member. “I read this when they offered it to me. I thought that this is one of the plays that I want to do over and over again.”

McBride said the appeal of “Ripcord” stemmed partly from the show’s consistent stream of silliness and laughs, a dynamic that seems like a bit of a departure for BETC. Even when the troupe has staged comedies in the past, they’ve always been committed to tackling bigger questions.

Whether it’s exploring the roots of Freudian ennui or elucidating the achievements of astronomer Vera Rubin, the BETC crew has built a consistent track record of pondering deep themes in their programming.

The troupe’s 2016-17 season doesn’t veer entirely from this formula. Selections include “Full Code,” a drama that focuses on a comatose character struggling to navigate memories, perception and reality as he works to return to the waking world; “An Iliad,” a solo take on Homer’s ancient epic poem; and “Silent Sky,” a drama that follows the discoveries of a Harvard astronomer named Henrietta Swan Leavitt as she seeks to wrest meaning from the stars.

As the season opener, however, “Ripcord” happily revels in giggles over gravitas.

That note of unfettered celebration may be tied to an unofficial homecoming of sorts. “Ripcord” marks the BETC’s return to the Dairy Arts Center after months of construction and renovation at the facility. The troupe staged some of the final productions of the 2015-16 season in different venues as the Dairy Center underwent some serious structural changes.

“It’s wonderful to return home, as it were. I’m really proud of what we did last season, but to have a better sense of stability, to have our audience know on a consistent basis where to find us is really great,” Remaly said, adding that improvements to sound, lights and dressing rooms have redefined the experience at the venue. No longer do actors have to rush offstage through public hallways in costume or deal with sound bleeds from a neighboring room. “It ups the game. It ups everybody’s game.”

A show designed to elicit a steady stream of laughs from the audience seems a fitting way to kick off the BETC troupe’s tenure in the renovated space. The rest of the season will offer plenty of moments to ponder weightier thematic questions, and Remaly said the cast of “Ripcord” is looking forward to offering audiences a night of straightforward entertainment.

At the same time, it’s not all chuckles for the show’s two leads. McBride sees plenty of serious undercurrents in the show’s set-up — two women with very different stories who are at the final stages of life, struggling to win a final battle. Relatable themes and a heartfelt spirit undergird the comedy here, she insists.

“I don’t want it to do a play and have it only be drama,” McBride said. “I think life is very funny and life is very sad. I like the blend of both of them. That’s what I love about ‘Ripcord.’ It’s a play that’s very funny, but that gets into other things. That’s the way life is, it flips. Out of that process comes growth.”

Ripcord: “A barrel of laughs and then some”
BETC’s Ripcord Takes Off at the Renovated Dairy Arts Center