Jonathan Howard, Silent Sky‘s sound designer, is our guest this week on the BETC Blog. He’ll walk you through the influences for the soundscapes of our upcoming production.

From English hymns to interstellar vibrations

The sound design for Silent Sky blends sounds representing space and earth with musical themes that ground the piece in the early 20th century.  The musical composition elements stem from a central hymn, “For the Beauty of the Earth.” The character Margaret performs the hymn, which then interweaves throughout the play.  Another influence on the musical material is the compositional work of Amy Beach. Beach was an American composer who broke new ground in the field of composition in the early 20th century.

In order to support the shifts of time and place in Silent Sky, the musical score creates textures that transport the action through Henrietta’s journey of discovery. The sounds of space are representations of the electromagnetic vibrations captured in NASA recordings. I used mathematical patterns and tone rows to create the seemly random, yet highly calculated, overtone sine-wave resonances depicting the “heavens.”

Tracking the sound onstage and behind the scenes

I mixed and mastered the sound design using advanced computer software that allows for intricate blending of diverse sound elements. Utilizing a vast array of sound filters and effects, the computer software allows all natural and synthesized sounds to be set in proper balance. The picture below shows how the tracks look in the computer interface, with the yellow lines showing volume changes for the different elements. 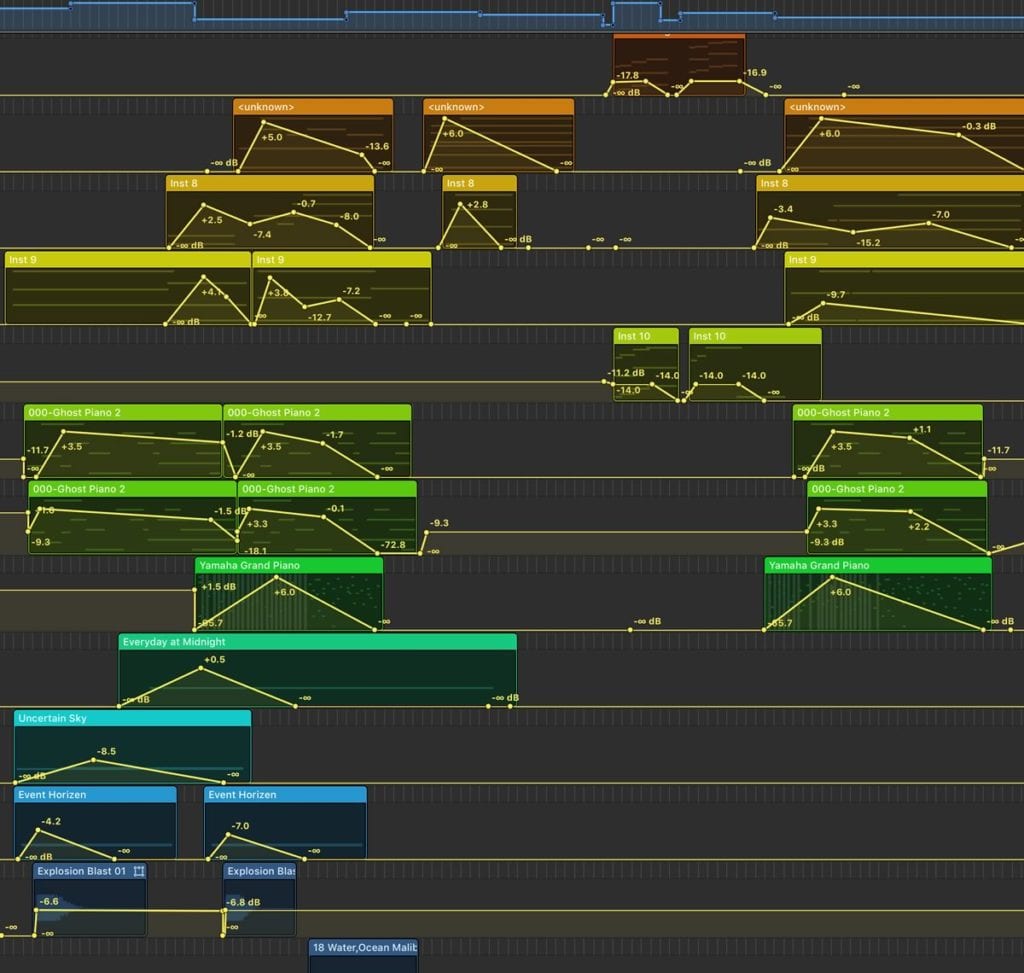 In the excerpt below, we hear the underscoring in a dream sequence where Henrietta pictures herself with her romantic interest, Peter, on an ocean liner gazing up at a sky full of stars.

Sustained string lines and piano songs support the telling of both the real-life events as well as the emotional experiences of the characters.  A variety of recorded instruments and sounds, ambient textures, sampled instruments and synthesized sounds weave together to create the different textures. When you come to see Silent Sky, you’ll be able to listen for the sounds of the heavens, while you’re watching the story unfold onstage.