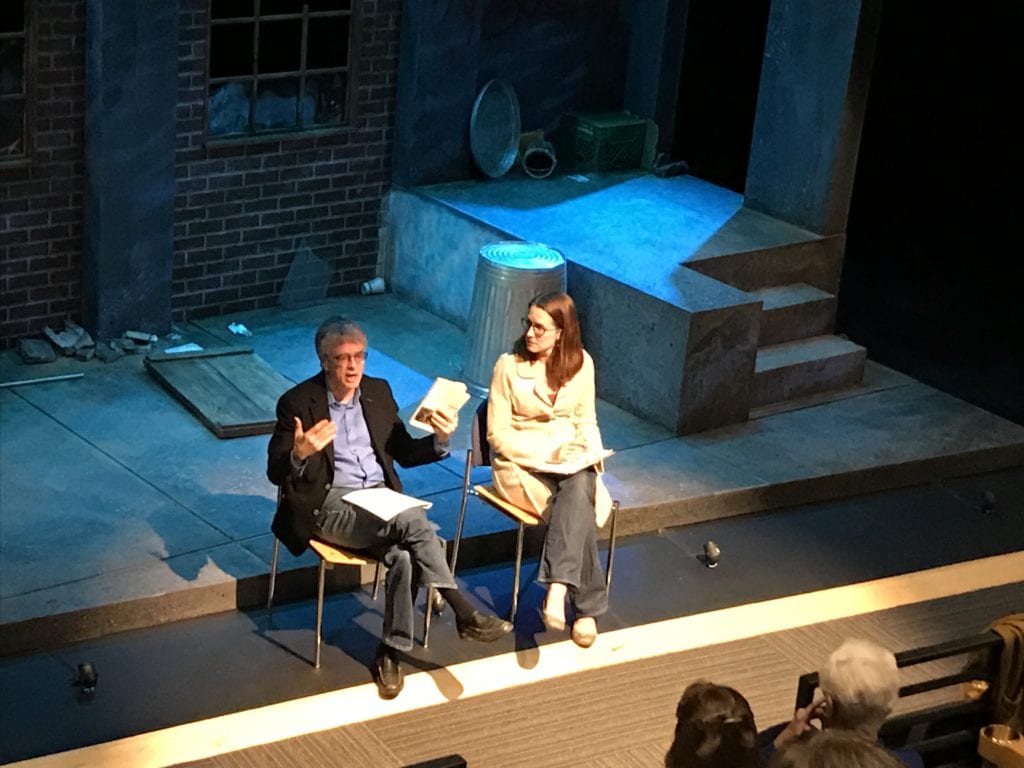 “What oral histories do is to bring out the reality of what ordinary people do in war, and what it does to them,” he suggested. In 1995, the CSWE first offered the undergraduate class “Stories from Wartime.” In this 14-week class on Tuesday nights, each week, a different panel of veterans shared their wartime experiences. At first focusing on World War II veterans, panels over the years have included veterans of the Korean War, Vietnam War, and the wars in Iraq and Afghanistan.

Through listening to the raw emotions of veterans, students learn how everyday soldiers react and respond in war. A class goal is to replace the romanticized, sanitized versions of combat depicted in movies and television with a far more realistic version of war experience, both in its brutal and honorable aspects.

Audience members engaged Dr. Clayton in a lively conversation about veterans and oral histories. Some shared personal stories they’d heard from their fathers or from close colleagues, and the difficulties of listening to stories that were so hard for their friends and families to tell.

Dr. Clayton recommended Jonathan Shay’s book Achilles in Vietnam: Combat Trauma and the Undoing of Character. The author examines the psychological devastation of war by comparing the soldiers of Homer’s Iliad with Vietnam veterans suffering from post-traumatic stress disorder. In particular, Shay examines the friendship of Achilles and Patroclus, and Achilles’ berserker rage after the death of his close companion. He then compares it to the passionate grief and deep rage of soldiers in Vietnam, who also felt they were fighting a meaningless war.

Soon, our conversation turned to war’s inevitability in human history. The question came up: “Is making war hard-wired into the genes of mankind?” Dr. Clayton answered “Yes.” He told us how the soldiers who spoke in his classes often said something like, “War is an experience I would never have given up.” Returning soldiers struggle to explain the brutality and horrors of war. They lack the words to explain things that seem beyond ordinary human experience. Using An Iliad‘s lengthy list of wars as his touchstone, Dr. Clayton reminded the audience that there have been less than 50 years in recorded human history when we have not been at war somewhere in the world.

“If war is the culture in which we live, why aren’t we hopeless?” asked a student.  Dr. Clayton responded: “If we do this work of listening to our soldiers and truly trying to understand the costs of war, maybe we can be better informed and make better choices about sending our young men and women into war.”

BETC’s post-show conversations challenge our audiences to connect theatre to a larger social context. Keep an eye on our “Special Events” page for future conversations after upcoming performances!