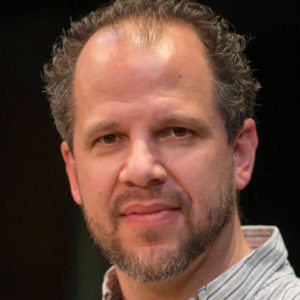 Aaron Posner is a nationally recognized playwright, director, teacher and former Artistic Director. He has won an Outer Circle Critics Award, an Elliot Norton Award, a Joseph Jefferson Award, a Bay Area Critics Award, two Barrymore Awards and six Helen Hayes Awards as a playwright and director. His plays and adaptations include “The Heal,” “Stupid Fucking Bird,” “Life Sucks,” “No Sisters,” “District Merchants,” “Who Am I This Time (And Other Conundrums of Love),” “The Chosen,” “My Name is Asher Lev,” “Sometimes a Great Notion,” “Cyrano,” “A Christmas Carol,” and more. His musicals include “A Murder, A Mystery & A Marriage” and “What Ho, Jeeves!” His plays for young people include “The Gift of Nothing” and “Me…JAne: The Dreams & Adventures of Young Jane Goodall.” He has directed more than 150 productions at major regional theatres across the country and was the founder and Artistic Director of the Arden Theatre Company and a former Artistic Director of Two River Theatre.