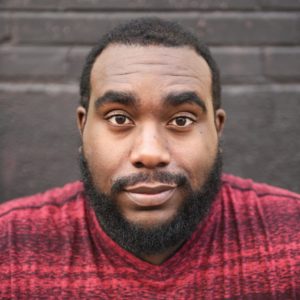 James Brunt (Writers Group) is an actor and writer born and raised in Denver, Colorado, most known for pushing the boundaries of what we know about theater with immersive productions in obscure settings and hard-hitting concepts that make his audience truly reflect on their views of the world. Playing roles from a cleaver-wielding beet butcher to a zany detective on the hunt for answers, he loves to create anything that will make his heart beat faster and blood boil up. He received the 2019 True West award for breakout actors for his challenging portrayal of taxi driver Bobby in “Mosque” with The Black Actors Guild. Other works recognized were his productions with The Band of Toughs and Control Group Productions. When Brunt isn’t taking the stage, he still finds ways to enlighten his audiences by performing original slam poetry or creating magical moments as the beloved Santa Claus.