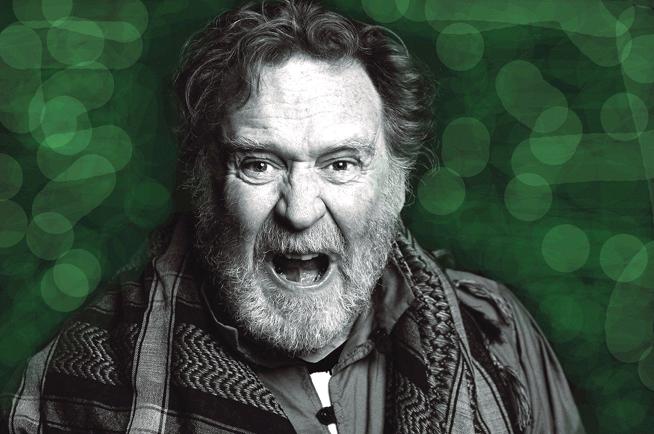 The Boulder Ensemble Theatre Company’s upcoming production of “An Iliad” is not so much a political statement as it is an unflinching examination of human nature.

The one-person show, co-created by Lisa Peterson and actor Denis O’Hare, offers a fearless take on one of the constant features of human existence: war. What’s more, the show’s timeless theme comes in a narrative package that may feel familiar for any literature aficionado or, for that matter, anyone who’s taken a 100-level Western Civilization course.

“They set out to write it as a response to the war in Iraq and as an investigation of what it means to be a country in perpetual warfare, which seems to be the new normal,” said Stephen Weitz, director of the BETC production that debuted on Thursday and the troupe’s producing ensemble director. “With that in mind, they decided to go back to the original war story, Homer’s epic poem the ‘Iliad.'”

The ancient lyric poem detailing a key segment of the Trojan War is the framework for the show, which features a single storyteller as its sole character. The Poet, as he’s known, has been telling the tale of the Trojan War for millennia; it’s a story of violent conflict that pops up every time humans take up arms against each other. As The Poet explains, “Every time I sing this song, I hope it’s the last time.”

Using a blend of verse from the original poem (the authors of “An Iliad” drew from the Robert Fagles translation of the work for the show), a chatty tone and contemporary references, the show seeks to connect centuries’ worth of warfare for a larger statement about the human race.

“The playwrights created this character who has been doing this for maybe 2,500 years — he has been all over the world, he has seen all of the conflicts, he has been a witness to so many wars and he has been telling the same story for centuries,” said Chris Kendall, a BETC ensemble member who plays the role of The Poet. “I think he views the causes and effects as being the same throughout history. It’s identified in the first word of the ‘Iliad.’ It’s about rage, and rage is something that can possess people’s hearts to such an extent that it will crowd out all other considerations.”

For the warrior Achilles, the king Agamemnon and the other characters featured in Homer’s tale of Bronze Age battles, rage plays a key role in the action. The ancient lyric poem focuses on a single stretch in the 10-year siege of the city of Troy, a conflict spurred by matters of the heart. All of the slaughter and destruction of the Trojan War stemmed from the flight of Helen and the anger of her husband, Menelaus. Years’ worth of death, pain and waste stemmed from seemingly quotidian and private matters.

As The Poet relates the story of the Trojan War — its roots and its consequences — it’s clear that the narrative didn’t stop with the ancients. The narrator offers a long litany of conflicts, from the Peloponnesian War to the Crusades to more modern conflicts, and invites the audience to make their own parallels with the ancient tale of the Greeks and the Trojans.

“It’s not a political show, in the sense that it’s saying one side is wrong, one side is right,” Kendall said. “It is in the sense that we’ve been a nation at war for the duration of two eight-year presidencies from both sides of the aisle. Regardless of who is leading us at any given moment, we as the population have enabled that and allowed that to be our modus operandi … This show is asking, is this the culture we want to be?”

This profound question comes in a stark form, as Kendall carries the entire show as the Poet. The one-person format is far from typical for BETC, a troupe that touts ‘ensemble’ in its very title. Indeed, apart from the critically acclaimed 2014 drama “Grounded” and the company’s yearly staging of the one-man comedy “The SantaLand Diaries,” the format of “An Iliad” is novel for the troupe.

According to Weitz, it was a risk he was compelled to take, thanks in part to the powerful message of the piece.

“For every season, you want to have a mix of entertainment and excitement and technical flair. At times, we also want to challenge our audience,” Weitz said. “I think this piece does that in a very powerful way. We’re all complicit in being part of a country that wages nonstop warfare in every part of the world … We have to continue to confront what those decisions mean.”

Selecting the Season at BETC: An Iliad
Season 12 Announcement Party