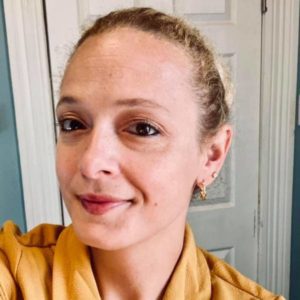 Cristina A. Bejan (Writers Group), PhD, is a multi-lingual Romanian-American theatre artist, historian, and poet living in Denver, Colorado. A playwright since age 14, she attended Northwestern University planning to become a Shakespearean actor. She got derailed by the library, which won her a Rhodes scholarship to study at the University of Oxford and a Fulbright to study at the University of Bucharest. While living in Romania, Bejan became involved in the local arts scene which inspired her to start the arts platform: Bucharest Inside the Beltway (BiB). The author of two award-winning books (history and poetry), Bejan worked at the US Holocaust Memorial Museum in Washington DC and was a contributor for their “Encyclopedia of Camps and Ghettos Vol 3.” She has written 19 plays and her work has been produced in four countries. Most recently her collaboration with James Brunt, The Scholarship, appeared at the Baron’s Court Theatre in London as a staged reading, after an online production by Theatre29 Denver and BiB. Her most successful play, Districtland, sold-out DC’s Capital Fringe Festival and was bought for TV development, and her favorite play, Colombo Calling – a play from Sri Lanka, had a staged reading at the Kennedy Center. The most unusual thing about her as a playwright is that she was approached by the World Bank to write plays for development when she lived in Vanuatu (South Pacific). The play she will write at BETC is a tribute to her grandmother from Colorado.