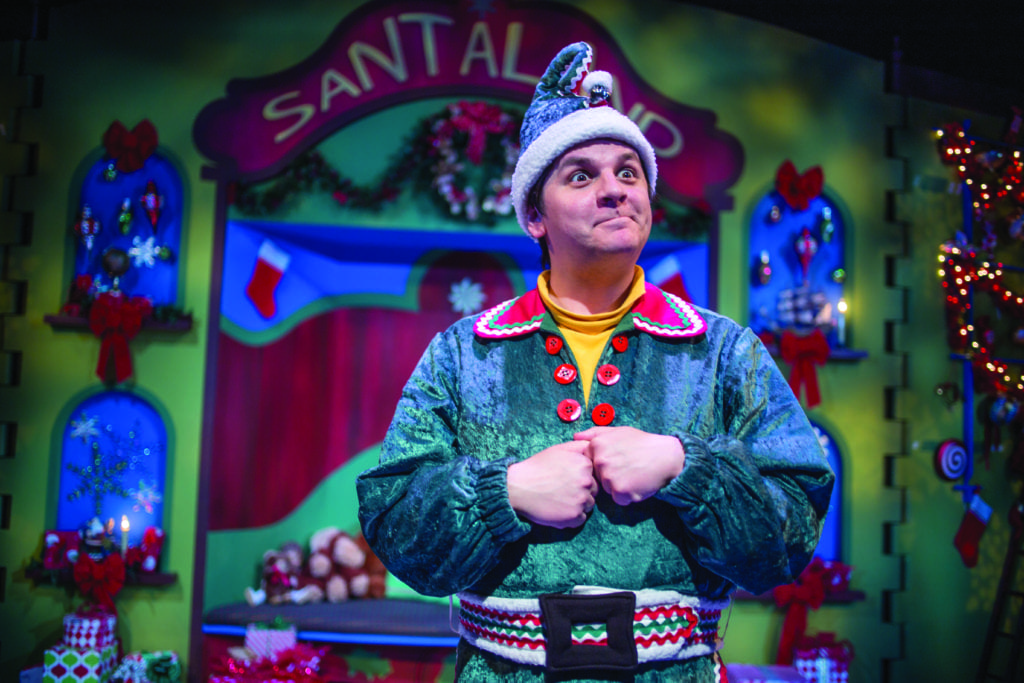 Review: An elfing good time–take a trip to SantaLand

By Gary Zeidner (Read the original.)

Forget the alleged War on Christmas. Judging by the Xmas-themed commercials on TV, the Xmas music playing at the mall and the Xmas decorations that popped up on both public and private property on Nov. 1, the real war is on Thanksgiving.

If Xmas season starts the day after Halloween, which apparently it now does, then Thanksgiving’s days are numbered, and if Turkey Day’s goose is cooked, we’ll lose our last beachhead holding back Xmas creep. Halloween won’t stand a chance against the festively sinister, red and green tide. It’ll fold faster than First Place at an origami contest, and then it’ll be Xmas time from Independence Day on.

That’ll be enough to turn even the Cindy Lou Who-est of yule lovers into grumbling Grinches and bah humbuggers. Oh, the abominable snowmanity!

For some, it’s already too late. The thrill is gone. The wonder’s become woebegone. The decided lack of exciting, new holiday entertainment isn’t helping any either. So, if Frosty leaves you cold and you’d rather turn Rudolph into venison than watch him guide the Fat Man’s sleigh one more time, then the Boulder Ensemble Theatre Company has just the Xmas counterprogramming you need to stuff your stocking, The SantaLand Diaries.

Based on the essay by David Sedaris, which was, in turn, based on Sedaris’ experience working as an elf in SantaLand at Macy’s in Manhattan, The SantaLand Diaries is a cynically candid, profoundly profane laughgasm.  Whether it’s obnoxious parents, spoiled brat kids, spitting Santas or even Cher, no one is safe in this holiday bitch slap.

That includes the reluctant elf himself, David, aka Crumpet, a struggling-verging-on-failing actor in his 30s forced to work at SantaLand to keep his head just barely above water. Don’t let the green velvet smock, red and white striped tights and pointy shoes fool you; David’s about as jolly as a junkyard dog, and his chagrin is comic gold. Comic frankincense and myrrh sold separately.

Playing David for the third year in a row, Michael Bouchard is supremely confident and comfortable in the role.  On opening night he ad-libbed and riffed like the veteran performer he is. “Have you ever been upstaged by a bear?” he deadpanned after a teddy he’d tossed aside landed improbably upright on a bow-topped present delighting and distracting the audience. Brilliant!

Bouchard’s David hearkens (the herald angels…) back to early Robin Williams or, for the younger crowd, Bill Burr. He’s a ball of burning energy, a mile-a-minute dialogue delivery system.  He goes supersonic within minutes of the proverbial curtain rising and doesn’t take his foot off the gas until the penultimate, token, feel-good scene.

The high intensity, often wild-eyed take on David, presented by Bouchard and obviously endorsed by Director Stephen Weitz, feels very much a piece of the evolution of BETC’s SantaLand. Nine years ago when BETC first brought SantaLand to the Boulder stage, performances were held at the Dairy Center, and David was played by Geoffrey Kent with his uniquely laid back style of drollery. Kent gave way to Matt Zambrano, a Patton Oswalt-ish thespian whose David was wound tighter by half. The production itself underwent a similar change five years ago when BETC partnered with the Denver Center Theatre Company. SantaLand relocated from the Dairy to its current home at the Denver Center for the Performing Arts, and it immediately took on a more citified vibe.

Along the way, The SantaLand Diaries has become a theatrical holiday tradition on par with A Christmas Carol for theatregoers looking for a different, spicier shot of holiday cheer. Or holiday bashing, depending on who you ask. Seating in the DCPA’s diminutive Jones Theatre is limited and will almost certainly sell out, especially as we get closer to Xmas itself. Grab your tickets now or risk lumps of coal later.