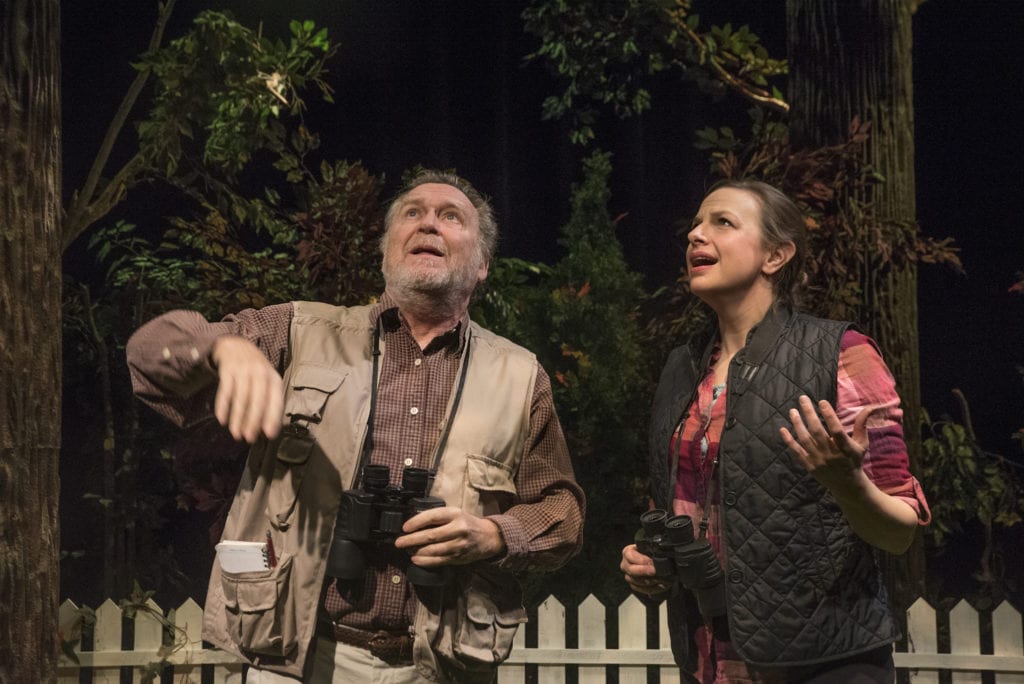 By Juliet Wittman (Read the original.)

Birds of North America takes place over a decade, as father and daughter John and Caitlin meet every fall to birdwatch in John’s Baltimore garden. Their relationship is both intimate and fraught. There’s profound understanding between them, even good will, but there are also moments of anger and deliberate cruelty. John is an avid birder; Caitlyn learns facts about bird life gradually over the years, and more important, absorbs the profound and gentle ethos of birdwatching. John has been observing with quiet grief the effect of global warming on the bird population and the natural world. He’s acutely aware of how rare some species have become, and that many others are extinct. “There used to be so much more of everything,” he says wearily. But his daughter has her own pressing losses to deal with.

This is a world premiere from the Boulder Ensemble Theatre Company. Playwright Anna Moench, who won BETC’s eleventh annual playwriting competition, clearly knows her birds, and she brings John’s obsession to life. Thanks to sound designer Jason Ducat, we hear their songs and trills, squabbles and warnings. Their names are spoken with affectionate emphasis by John, in a warmly compelling performance by Chris Kendall: American redstart, tufted titmouse, chipping sparrow. He teaches both us and Caitlyn the appearances and habits of these creatures, the effects on them of exceptionally warm winters and, in an eloquent exegesis, what enables the silent flight of owls, and why their flight must be silent.

Though Moench is concerned about climate change, her play isn’t polemical. While John mourns vanished species and works on an HIV drug, and later, a genetically modified vaccine against the Zika virus, Caitlyn explains the difficulties of earning a living — “People have to eat, Dad” — and points out that his altruistic pursuits are funded by her mother’s ample doctor’s salary. She defends her choice of jobs: copy editing for a right-wing website and, a few years later, working as a marketer for the oil and gas industry. Caitlyn is brought to interesting and empathetic life by Lindsey Pierce.

Moench’s refusal to take sides is reminiscent of the careful conversations among relatives on opposing sides of the political spectrum at so many dinner tables, and alludes to the complexities of political thought. What do you say to the uncle who’s a staunch environmentalist but loves guns, or to the feminist who opposes abortion rights? John’s love for nature is sincere, but in discussing his Zika research, he uses the exact phrasing used in bio-tech propaganda, insisting there’s a scientific consensus that GMOs are safe. Does he really believe this? Though Caitlyn’s need for a salary is convincing, you have to wonder if her choices weren’t partly fueled by rebellion against her self-righteous father. “Who are you helping?” he challenges her. “We need oil,” she answers.

Every now and then there’s a blind and ugly barb. Caitlyn has just described the painful details of a miscarriage, doubly agonizing because it’s not the first and she carried the child for eight hope-filled weeks. “I wanted a baby, Dad,” she tells him. But he’s still bitter over her work on the website and wants to know, “Are you pro-life now?”

Birds of North America is the work of a very talented young playwright. There’s no melodrama, no big reveal, but the play is absorbing throughout its ninety minutes for intelligent dialogue, carefully etched characters and the believable relationship it depicts. Stephen Weitz’s direction is patient and subtle, the set — light on shining leaves, a carefully detailed tree trunk — is the work of Tina Anderson and lighting designer Katie Gruenhagen, and it’s beautiful. There’s a depth charge of feeling beneath the everyday talk, a sense of two lives unfolding, and time in all its jolting discontinuity and its continuity (John keeps a detailed birding book throughout). And always the presence of those miraculous flitting creatures, so ordinary and so entirely incomprehensible, sole living relatives of the dinosaurs that once walked the earth.