We are a nation in motion.
Approximately 12% of Americans change addresses annually.  If you ask how many moved to a new location in the last five years, the number jumps to 35%.
There may be millions of reasons why so many people move, but it’s not hard to identify the major one:  opportunity.  If we know that opportunity is the primary incentive to move, we also know something about those who move on.  They have ambition.  They are not satisfied to stay put when they have a chance to improve their lives.
Nowhere can you see the twin forces of opportunity and ambition operating as clearly as you will in Ambition Facing West, Anthony Clarvoe’s epic tale of a family as it moves from Croatia to Wyoming to Japan.  While the multigenerational narrative starting in Croatia may seem remote and less than relevant at first glance, it is neither.  Rather, it’s a story that we have all been brought up to admire.
Clarvoe doesn’t sugar coat his story; the streets of America are clearly not paved in gold.  Working in a coal mine is still hard work in difficult conditions with poor pay.  The dream is always better than the reality. 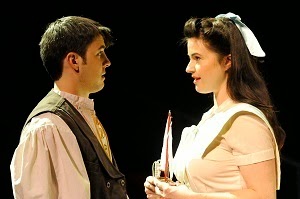 This is a stellar cast, doing a remarkable job with a challenging script.  The story telling is non-linear.  We fade between geographic locations during a time span of seventy (70) years.  The same character, for example, Stipan, is, is played by two actors, one the younger version (John Hauser), the other the older (Chris Kendall).  Likewise, Young Alma is played by Adrian Egolf, while Haley Johnson plays the Older Alma.  This cast can maintain a single consistent character through 70 years and two actors…no small feat.
All four actors in both these central roles are outstanding.  Egolf’s Young Alma is the picture of innocence and naivete.  She is the beautiful, intelligent, obedient child of our dreams.  Her genuine curiosity about her roots and her young love interest (Jim, played by Benjamin Bonenfant) are the only signs of rebellion from an otherwise ideal daughter.  Egolf absolutely shines in all her scenes, but when she falls passionately in love with Jim, she discovers a part of herself she never knew existed.  It is a touching scene of innocence, love, and self discovery, and Egolf nails it. 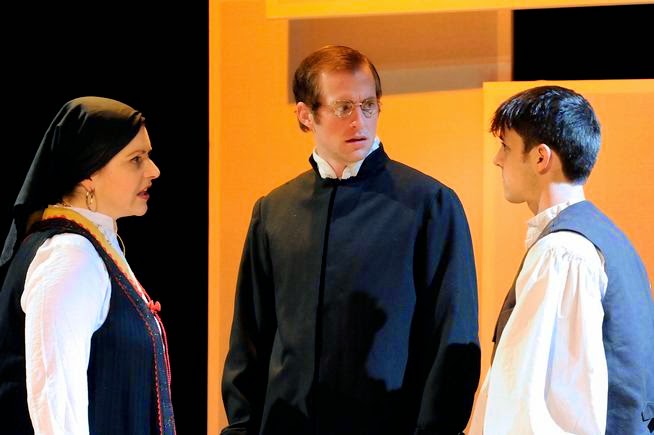 Haley Johnson, the adult Alma, carries a Zippo lighter with her, but not because of her smoking habit.  Rather, the Zippo was a gift from Jim, her now long lost first love.  Alma becomes a successful career woman, but she never forgets Jim.  Johnson is excellent as the adult version of Alma, no longer naive, no longer innocent, and no longer married.  She has a son, Joey (also played by Benjamin Bonenfant), and she passes the lighter along to Joey in a tender moment.
He’s confused; he doesn’t smoke.  She explains it to him:

Alma:  “It’s for remembering with.”
Joey:  “Remembering what?”
Alma “Remember, O monks, that all this world is on fire.”

Johnson’s gift to her son is literally and figuratively brilliant; the torch is literally passed to a new generation.   It’s a compelling, climactic scene as Alma grows from a detached adult to a compassionate mother.  Just like her younger Adrian Egolf version, Johnson as the adult Alma discovers a part of herself she didn’t know about. 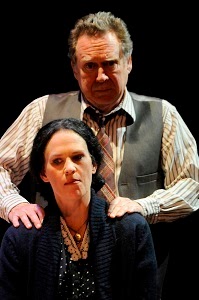 It is, though, perhaps Chris Kendall who gets the best roles here, as he plays Ivo Pasic, who recruits Croats to immigrate to America, and the adult Stipan, Alma’s father.  Both roles are central to the story, and Kendall wastes no time bringing charm, wisdom, and occasional humor to both men.  Kendall has a keen sense of timing; his pauses are often as loaded with meaning as his lines.  His Ivo is a clever but dishonest character; as Alma’s father, he glows, guiding Alma without giving her too much information about her heritage.
Tina Anderson‘s set design is marvelous; the gravel pit gives the actors a rare opportunity to distinguish between locations simply by walking on a different surface.  The 17 white panels forming the backdrop make Andrew Metzroth‘s lighting design come alive.  Dialect coach Tamara Meneghini has made the cast into credible Croats. 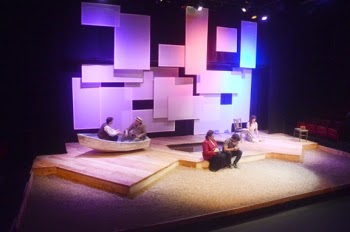 There are so many great performances, and so many magical moments in Ambition Facing West, it’s difficult to summarize them all here.  Simply said, this production is like a fine wine; everything works, and the experience electrifies the mind and the senses.  A sip will tantalize you, a whole bottle will intoxicate you.
The arc of Clarvoe’s story is long and detailed.  He gives us a script that tells not one story, but thousands; every family that leaves its roots goes through a similar journey.  They lose what they left behind, in return for a new reality.  Whether that new reality is better than the one they left behind is debatable.
What is not debatable is the human experience of deciding on a personal level how our lives must be lived.  There’s no right or wrong here, only what we decide to do with our own opportunities, our own freedom, and our own lives.  Whether we leave our roots because we are drawn to opportunity, or stay in place because we are drawn to our traditions and families, there are always consequences to those decisions.  Ambition Facing West reminds us that, for better or worse, we control our own destiny.
As I mentioned above, we are a nation in motion.  Ambition Facing Wes is a dramatic, beautiful, engaging and relevant display of the people we were and the people we are.  It’s a “wonderful story, wonderfully told,” and it’s the reason we go to the theater.  This is an excellent production of a powerful script, and it should NOT be missed.
NOTES:
This play is satisfactory for all ages.  That said, however, the non-linear script and the Croatian accents may cause those under 16 or so to start fidgeting early on.
This show closes on November 2, 2014.
Pre or post show dining suggestion:
T⎮aco, 1175 Walnut Street, Boulder, 80302, turned out to be a very pleasant surprise.  We had planned to stop at the Walnut Brewery & Restaurant (practically next door to T⎮aco), but there was a 20 minute wait before seating.  Since we didn’t have time to wait, we checked into T⎮aco, where we were seated immediately.  (They are probably accustomed to getting the overflow from the nearby brewpub.)
What a marvelous surprise.  The service was fast, excellent, and competent.  The food was tasty; small soft tacos, excellent queso with the chips & salsa.  We tried three of the salsa choices, including the habanero and the chipotle.  The habanero is eye watering, sweat inducing HOT, the chipotle was delicious.  We will definitely go back.
Announcing BETC’s Generations Winner: ‘Burning Cities’ by Simon Fill
REVIEW: Ambition Facing West